A Country by Consent was produced by Bill Dunn and Linda West of West/Dunn Productions in Ottawa. Content has been vetted by specialists in Canadian history including the Public History Group at the University of Victoria, which includes pre-Confederation and post-Confederation specialists. This group was under the supervision of Dr. Peter Baskerville, then Chair of History, University of Victoria, BC.

Artistic Productions Limited, which trades as West/Dunn Productions, has been producing films and audiovisual materials for over 20 years. Other productions include television documentaries, Normandy Dream and Spitfire Pilot, which aired in prime time on CBC-TV, and the recent theatrical feature documentary, Hoodwinked: The Myth of Free Trade.

Beginnings
We began this Canadian history project at the dawn of the digital revolution as a response to seeing educational materials in the new media creeping into Canadian schools from foreign suppliers whose content reflected a different culture. A presentation on the history of communication, for example, included songs about “the pony express to Kansas City” instead of references to voyageurs and canoes.

At the same time, Canada was in the throes of another constitutional debate. We decided to approach Canadian history from the theme of the constitutional evolution of the country so we could put these recurring debates in their historical context.

Why a constitutional thread?
A constitution is the system of fundamental principles according to which a nation, state or group is governed. But it’s not just a legal document setting out the basic rules, rights and responsibilities by which a country is organized. It also expresses the philosophy of the country - how its people relate to each other and what values are important to them.

Canada’s federal structure is a much-needed model for the rest of the world. It is a form of government that can accommodate different interests and protect minorities within a democratic system.

Why “A Country by Consent”?
Canada is not a country based on ethnic uniformity like many countries. It is not a country forged by the fires of civil war or wars of unification. It is a country which has evolved and been held together by the agreement and will of the various groups who have helped build it over the years. It is a country by consent. We acknowledge that the consent is not universal and Canada continues to work at reconciliation with the original inhabitants of this land, the Indigenous nations.

Content
The content is organized into 27 chapters, many with an audiovisual introduction. The text is enhanced with additional film clips, interviews, essays by guest historians, hundreds of archival images, satellite maps and definitions.

Project initiated with the support of Heritage Canada.

CBC-TV Archive: Roy Harris
René Lévesque from “This Hour Has Seven Days”
Bruce Hutchison from “The Days Before Yesterday”

Additional thanks to:
Gilbert Parent, Speaker of the House for kindly allowing us to film him explaining the workings of Parliament and “How Laws are Made”
and
Bruce Hutchison
for generously submitting to our video interview and supporting us in the early days of this project.

From the Provincial Archives of British Columbia:

From the CBC Archives:

Moodie, Susanna (1962). Roughing It In The Bush. Toronto: McClelland & Stewart.

How to Cite this Resource

If you are citing this resource in a project, the author and publication information is:

To cite a specific file within the resource, for example the War of 1812: 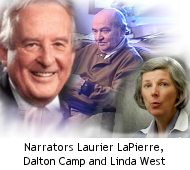 For a brief history of Canada's economic relationship with the United States: click here for Part 1 and click here for Part 2; total length 14 minutes. This is an excerpt from the feature documentary, Hoodwinked: The Myth of Free Trade, produced by West/Dunn Productions and edited by Bill Dunn. Broadcaster and author Laurier LaPierre narrates after a short intro by Linda West and a guest appearance from Canadian political commentator Dalton Camp.