With the introduction of an elected Assembly in 1791, conflict between French and British was set up within the government of Lower Canada because the Assembly was mostly French, but the Executive branch of government was predominantly British. 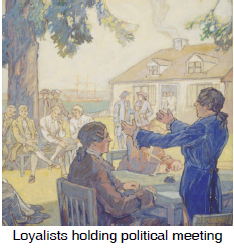 The 10,000 English-speaking Canadians in Lower Canada were not entirely happy with the Canada Act. They failed to get many of the demands they had sought, including a repeal of the Quebec Act. They still lived under French civil law and a mostly seigneurial seigneurial system: a feudal system of land ownership whereby huge grants put land ownership in the hands of seigneurs who rented sections to farmers. society.