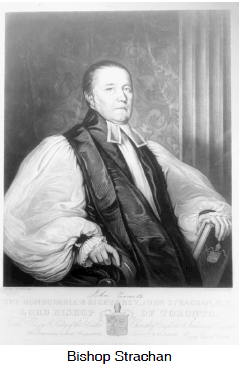 These people favoured British traditions like the monarchy and they supported the idea of keeping government in the hands of appointed legislative and executive councils. They opposed the idea of having an elected Assembly and felt that they were superior to the rest of the masses and power should rest with them. Economically, the Family Compact represented progressive industrialization and they promoted such activities as building canals and establishing banks. Among the most well known members of the Family Compact was Bishop John Strachan, head of the Anglican Church. As the official Church of England, the Anglican Church benefited from a system of Clergy ReservesClergy Reserves: lands set aside for the Protestant clergy. which set aside one-seventh of all Crown land for the use of the church. Later, people of other Protestant faiths, like the Presbyterians, began to challenge these privileges held by the Anglican church.

In Lower Canada government and business were controlled by a small group of upper class families which became known as the Chateau CliqueChateau Clique: the small, upper class, mostly English group that controlled the government of Lower Canada.. This was a group similar to the Family Compact in Upper Canada, but with the additional factor that, with a few exceptions, they were an English-speaking elite within a French-speaking majority. This oligarchyoligarchy: a form of government in which power is held by only a few people; also the people who form such a government. was quietly trying to convince Britain to unite Upper and Lower Canada into a single province with a single legislatureLegislature: the branch of government responsible for making laws., which would give anglophones the majority and eventually lead to the assimilationassimilate: to adopt the values, customs and behaviour of another society; to be absorbed into it. of the French.