During the 1960s and 70s the western provinces became more politically vocal within Canada. They were tired of the power centres being in Montreal and Toronto. What gave them strength at this time was the wealth of their natural resources. The world price of oil had been rising and oil exploration and development in Alberta was creating a lot of wealth in the province. In Saskatchewan they had some oil, but potash: any of several potassium salts mined and processed for use in agriculture (eg: fertilizer) and industry.potash was the major resource. 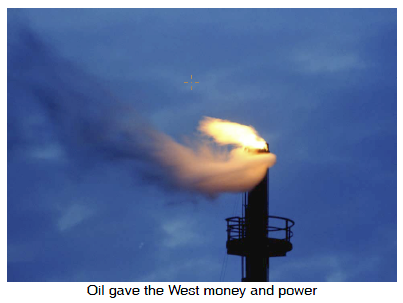 When the federal government ruled in the 1970s that oil produced in Canada had to sell within Canada at a fixed price lower than the world market in order to benefit Canadian consumers, the western provinces were upset by this interference with the price of their revenue-earning resource. They stepped up their demands for more provincial control of natural resources. This had been an area of provincial jurisdiction: authority, power or control.jurisdiction in the original BNA Act, but Ottawa, especially during the two world wars, had been playing a stronger role in resource legislation. Later in the 1970s Trudeau brought in a National Energy Policy that tried to make our oil industry more Canadian and less American controlled, but it involved further federal government interference which the western provinces didn't like.

During the constitutional debates of the 1970s, the western provinces, especially Alberta and Saskatchewan, were siding with Quebec in the demand for greater provincial authority over certain important areas. They also joined Quebec in complaining about the expense of national policies coming from Ottawa.