With more and more men sent overseas to fight, there was a labour shortage in the factories at home and women were actually encouraged to join the civilian work force. 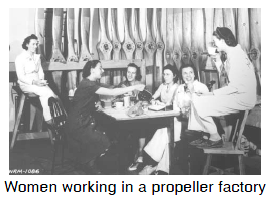 Some women had always worked outside the home, but mostly in poorly paid jobs like teaching, office work, textile factories and retail sales. Work in the war-related industries offered attractive wages to women, although still below that paid to men for the same work. A lot of women contributed to the war in non-monetary ways, too, by working hard as volunteers as well as maintaining their homes and families during difficult times. 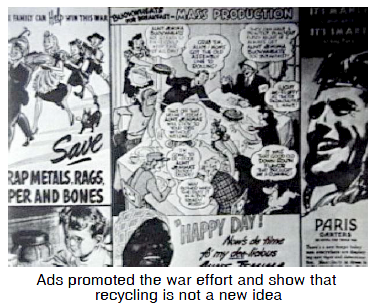 Women were even recruited into the armed services during the Second World War, but they were placed in support jobs, not on the front lines.

After the war, however, most people, men and women included, thought that women should go back to their place in the home. Governments feared an unemployment crisis if the men returning from overseas couldn't find jobs. In 1944, 27 percent of women were working outside the home. This percentage wouldn't be reached again until the 1960s.