This was an age known as the baroque period. Music was fairly intricate and complicated and didn't have the emotion that later, romantic music would have. Partly this was because the clavichordclavichord: an early stringed musical instrument with a keyboard. The piano evolved from it., one of the most popular instruments of the day, couldn't play the same range of loudness and softness that the modern piano can. The most famous composer from this period was the German, Johann Sebastian Bach (1685-1750), although his work was largely forgotten and unpublished until 75 years after his death. The Canadian pianist, Glenn Gould, loved Bach's music and recorded a lot of it including the Brandenburg Concertos and the Goldberg Variations. Vivaldi (1678-1741) was another important composer and his work influenced Bach. While ordinary people always had their own folk music to lighten their workload, formal music was mostly written to be performed in church. Gradually, though, people began to write operas and concertos to be played in theatres and the homes and courts of noblemen.

At this time, only the middle and upper classes had the time, opportunity and ability to read or go to the theatre. Writers were beginning to use their gift to comment on society and human characteristics. 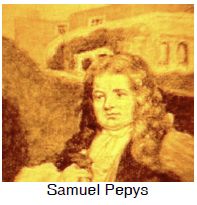 Samuel PepysPepys: English diarist and naval administrator; lived from 1633-1703. (1633-1703) kept a wonderful diary which gives us a lively record of life during these times. He recorded his personal affairs as well as what was happening in the English court and on the streets of England where hundreds were dying of the Plague.


John Milton, was old and practically blind when he finally had the time to write his famous epic poem Paradise Lost, which was published in England in 1667. Later Daniel Defoe moved away from religious subjects to write a mix of realism and romance in his novel Robinson Crusoe (1719). In France, Louis XIV encouraged art and literature, at least early in his reign before wars began to take the biggest bite of his budget. Moliere,Moliere: French dramatist and comic actor who lived from 1622 - 1673. son of the royal upholsterer, became the royal comedian and poked fun at his aristocratic audience through satires like Tartuffe.

Shakespeare was still writing in the early 1600s. This later period of his writing (he began publishing in 1588) included such plays as Hamlet, King Lear and The Winter's Tale. Born in 1564, he died in 1616 purportedly of a massive hangover.

Champlain began the Ordre de Bon Temps (Order of Good Cheer) in Port Royal in 1605 in order to keep up morale during a second winter in the New World after a demoralizing first winter. To boost involvement, a competition was introduced. Each settler had a turn, every fortnight, to be "Chief Steward" and organize the whole affair - hunting game, preparing the meal and planning the entertainment. There was quite a bit of rivalry to see who could put on the best party.