In 1837 there were uprisings in both Upper and Lower Canada against the conservative minority in power. In Lower Canada there was the added dimension of French animosity toward the governing English-speaking elite. 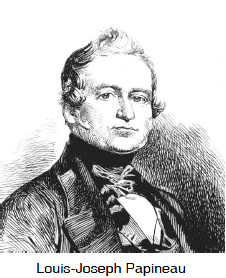 The uprisings in Lower Canada were led by Louis-Joseph Papineau and the Parti patriote. Papineau published his grievances in a document called the Ninety-Two Resolutions. The Patriotes wanted greater control of civil salaries and patronage by the elected Assembly (which was primarily francophone); more economic development at the local level (which would also give the opportunity to issue patronage); and more access to government positions by the francophone middle class. Recurrent violent rioting characterized politics in Montreal in the early 1830s and in November 1837 English and French groups began fighting in the streets to such an extent that British troops were brought in to put down the uprising. Fifty-eight Patriotes were killed and British authorities implemented a temporary dictatorship by Governor and Council.

In Upper Canada the rebellion was led by William Lyon Mackenzie, whose grandson, William Lyon Mackenzie King, would become a famous and long-serving Prime Minister of Canada. Mackenzie and many of his followers were recent immigrants from Great Britain who were already hostile to the British upper classes and the Anglican Church. These feelings were intensified by the monopoly of power held by the Family CompactFamily Compact: name given to the oligarchy that controlled the government of Upper Canada.. Mackenzie led a small band of rebels down Yonge St. in Toronto in an attempt to overthrow the government and set up an American-style republicrepublic: a democratic system of government in which the head of government is a president rather than a monarch.. The rebels were quickly defeated and Mackenzie fled to the United States where he lived in exile.

Both rebellions called for a more accountable government where the Executive (or what we call today the Cabinet) was drawn from the elected majority of the Assembly. In 1837, all important decisions were made by an appointed council that had no connection or obligation to the elected Assembly and therefore did not have to pay attention to the wishes of the voters.