James Wolfe was born in England in 1727 and died on the Plains of Abraham near Quebec City in 1759.

His father was an army officer and Wolfe was commissioned as a second lieutenant in his father's regiment in 1741 at the age of 14. He fought in various battles in Bavaria (Germany), Scotland and the Netherlands and played an important role in the capture of Louisbourg in 1758. He went back to England suffering from rheumatism and other ailments, but was sent back to North America to lead the campaign against the French at Quebec City. He was only 32 years old. 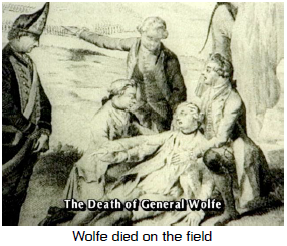 Wolfe and 4500 well-trained troops sailed up the St. Lawrence River and spent a few weeks trying to find the best route to scale the bluff to the city. Gradually sneaking his ships past Quebec City's batteries, Wolfe anchored in the cove, Anse au Foulon, just west of the city. Maintaining the element of surprise, Wolfe's troops climbed the cliffs during the night and met Montcalm's troops on the Plains of Abraham the morning of September 13. The battle was over in 20 minutes. The British won, but their young general, Wolfe, died on the battlefield.