Poundmaker was a Plains Cree chief. His mother was part French-Canadian. As a child he was adopted by the chief of a raiding Blackfoot tribe to replace his own lost son and when Poundmaker later returned to the Cree people he had added status because he now carried influence with the Blackfoot. Poundmaker was described by one government farm instructor as being of "dignified bearing, tall and good looking, and a good speaker..." 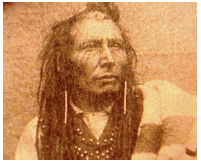 Poundmaker spoke out against Treaty No. 6 which covered the territory occupied by his people. He said if the Indigenous people were going to give up their land, the Canadian government should provide farming instruction and assistance after the buffalo had gone.

During the Northwest Rebellion of 1885, Poundmaker, always an advocate of peace, intervened with his people to try to prevent bloodshed. Many of the young warriors were angry because their rations had been reduced in 1883 and food was becoming increasingly scarce. Faced with starvation, some of them raided food stores in Battleford (in present-day Saskatchewan). For this, Poundmaker was charged with supporting Louis Riel in the rebellion. He was sentenced to three years in prison, but was released after one year. His health and spirit had been broken, however, and he soon died.