The Corn Laws were part of Britain's colonial mercantile economic system. Grain from the colonies entered Britain tax free or with only a low tariff, but grain from any other country had a substantial tax added to its price. 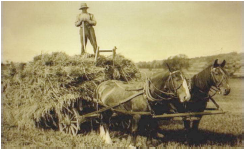 In the 1840s a new movement called the Anti-Corn Law League began to campaign against these protective tariffs. They were in favour of free trade and laissez-faire economics. Get the government's nose out of the economy, they demanded, and let the market set its own prices. These people were part of a rising industrialist class who wanted to be able to buy raw materials from the cheapest source and sell their finished products for the best price they could get. They didn't want to be restricted to dealing only with the colonies. If there were no tax on grain imports, these factory owners felt, then food would be cheaper and they could pay their workers less money. 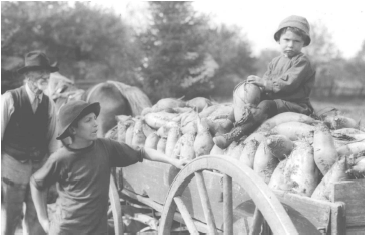 In 1846 the free traders won out and the Corn Laws were done away with. At first this had a devastating effect on British North America which had always enjoyed a protected, guaranteed market for its wheat. There was also a world depression at the time which didn't help matters. But things began to pick up in the 1850s and the North American colonies turned to the United States as a trading partner. North-south railway lines began to replace east-west canal systems as the favoured lines of trade.

As a footnote: Britain pursued this free trade policy in agricultural goods for a hundred years. Then, during the Second World War, when German U-boats came between the island of Britain and its far-flung food sources, like Argentina and the United States, attitudes began to change. The importance of food security was recognized and the Agriculture Act of 1947 offered guaranteed prices and other incentives to British farmers to "re-agriculturalize" the British countryside and support the production of home-grown food.