Early in the 1500s, the shores off Newfoundland were throbbing with activity. Thousands of sailors came to participate in the whale trade which was big business in the 16th century. Most of the whalers were from the Basque region - a hilly area that straddles the border of present-day France and Spain. At one time the whales had been plentiful along their own shores, but overwhaling had caused the whale stocks to disappear and the fishers were forced to seek new waters. 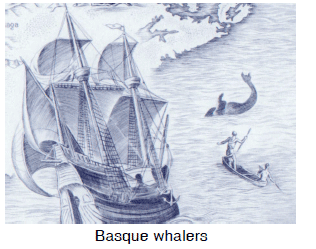 Every spring whales migrated through the Strait of Belle Isle, off the coast of Newfoundland and the whalers found it easy to chase them in row boats and catch them with harpoons.harpoon: a barbed spear with a rope tied to it, used for catching whales and other sea animals. Then they dragged the dead whales back to a whaling station where the blubberblubber: the fat of whales. was boiled down and rendered into oil. In Europe there was a big demand for whale oil because it was used for lamp fuel, as an ingredient in soap, as a lubricantlubricant: an oil or grease put on parts of machines that slide or move against each other, to make them work smoothly., and for many other things.

Eventually the whales were over-hunted here, too, and by Champlain's time - the early 1600s - the whaling industry off the coast of Newfoundland had come to an end.