As this map shows, the Quebec Act extended Quebec's frontier into the Ohio Valley. (Light blue area was added to dark blue area.) This was intended to please the fur traders of Quebec and to discourage a westward push by the Thirteen Colonies to the south. 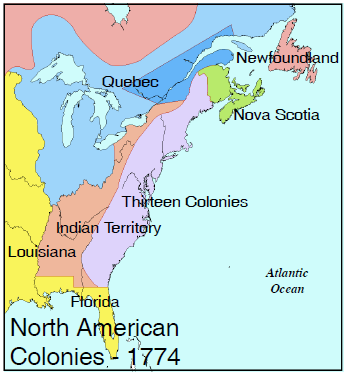 There was some logic to this distribution of territory, because at this time the few white men who had penetrated the area were French and their access was through the St. Lawrence and Great Lakes waterways.

British common law common law: law based on custom and usage and confirmed by previous decisions of judges (precedent). It is not codified or written down.was to apply in criminal cases, but French civil law, as administered by the seigneurs seigneur: a landowner in New France whose estates were originally granted by the King of France. He also administered justice within his seigneury., would be used in disputes over property. Seigneurial dues were also restored.

The Roman Catholic church was allowed to collect tithes tithe: a portion, usually one-tenth, of your yearly produce (from land, animals or work) given to support the church and clergy. and Roman Catholics could sit on governing bodies. There was no elected Assembly, but an appointed legislative Legislature: the branch of government responsible for making laws. council made laws with the governor's governor: an appointed representative of the Crown sent to govern a colony. consent.

<< Prev: The Quebec Act: Introduction
Next: Reaction of the English Merchants >>
Further Reference