The United Empire Loyalists came to Canada from the United States when the Thirteen Colonies revolted against Great Britain and setup an independent country in 1776. 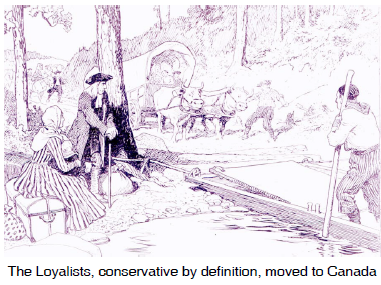 As their name suggests, the Loyalists were loyal to Britain and did not share the Americans' independent aspirations. Some fled north during the war of independence. Some came after, fleeing persecution by the victorious revolutionaries.

Many Loyalists headed for Nova Scotia. Many others arrived in Quebec, but the Governor, General Frederick Haldimand, was afraid of conflict with the French so he encouraged the new settlers to move up river. Here they rapidly populated the north shore of Lake Ontario in what became, under the Canada Act of 1791, the new colony of Upper Canada. Its first lieutenant-governor was John Graves Simcoe. Simcoe wanted to re-create a piece of England in the new world and he encouraged the immigration of Loyalists from the United States. Depending on their rank, the newcomers received varying grants of land and other assistance in clearing and establishing farms.

It was pressure from the UEL's that led to the Canada Act of 1791. They wanted to ensure that they had free title to their lands - the freehold freehold: a system of land ownership in which the owner had the freedom to either keep the land for life, or sell it, or transfer it to his heirs. system of land tenure - and they wanted an elected Assembly like they were used to in the United States. 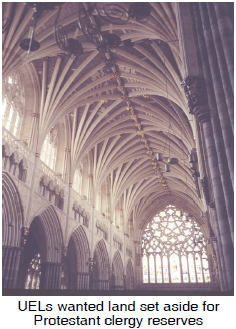 They also wanted a certain amount of land set aside for Protestant clergy reserves Clergy Reserves: lands set aside for the Protestant clergy. (just as the Catholics had). The Canada Act provided these reserves, but didn't specify which Protestant church was entitled to them. The Church of England Anglicans assumed the clergy reserves belonged to them. But a generation later, other Protestant churches, like the Scottish Presbyterians Presbyterian: Protestants who believe in having simple religious services and church government by a group of ministers and elders of equal rank., were demanding a share, too.

Not all Loyalists were white Anglo-Saxons. A lot of black slaves had fled to the British side during the American revolution and came north after the revolutionaries won. Most of them settled in Nova Scotia. About 2000 Iroquois Loyalists came north as well. Perhaps the most famous was Chief Joseph Brant who settled with his people around the Grand River in Ontario. The city of Brantford is named after him.

<< Prev: Who Could Vote? 1791
Next: Conflict in Lower Canada >>
Further Reference