John Graves Simcoe was the first lieutenant-governor of the newly created Upper Canada. 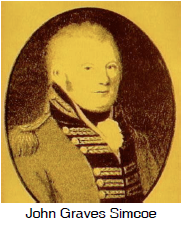 He and his family lived in the colony until 1796, when they returned to England. While he was governor, Simcoe encouraged more Americans to move to the English-speaking colony by offering free Crown land to the new settlers and making provisions for Protestant clergy reserves. He named York (present-day Toronto) as the capital of the colony. 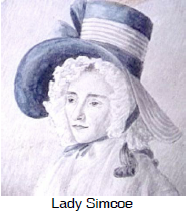 Simcoe's wife, Elizabeth, kept a detailed diary of her life in Upper Canada and was also accomplished at sketching and painting. Her writings and drawings have contributed a lot to our understanding of those early days. She quite loved Canada and its natural beauty, finding fault only with the heat and the mosquitoes. When she returned to England she took several mementos with her including a sleigh and a canoe.