1876 - Toronto's Ned Hanlan came to international attention when he won the centennial single sculls event in Philadelphia at the age of 21. 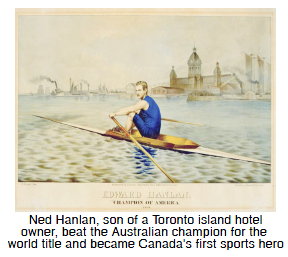 He held the world professional sculling championship from 1880-1884. Hanlan grew up on one of the Toronto islands and Hanlan's Point is named after him.

1877 - The first performance of Tchaikovsky's ballet, Swan Lake, was produced in Moscow. It was a failure, due apparently to a sloppy performance. It wasn't until after Tchaikovsky's death that the ballet was revived and went on to become a world favourite. Canadian Karen Kain was famous for her interpretation of the lead role in Swan Lake. 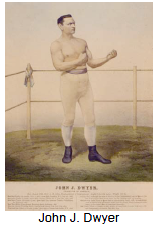 While railway tracks were slowly making their way across the continent, a young man from a future Canadian province was making a name for himself in the world of boxing. John Dwyer was a champion boxer who fought all over North America. He was born of Irish stock in St. John's, Newfoundland on August 15, 1849. In July 1877 he deposited $500 with the clipper ship office in New York City and with it his challenge to fight any man for the championship title. After six weeks his deposit was returned to him for lack of challengers. This certainly testifies to his prowess in the sweet art of pugilism: the art of fighting with the fists. (Latin: "pugil" means boxer.)pugilism! When a match with Paddy Ryan of the U.S. was set for April 1878, it seemed Dwyer was at last getting his chance to take the crown. But again he was thwarted by the lack of a mutually agreed upon stakeholder. Finally in May 1879 Dwyer beat Jimmy Elliot in 12 rounds, 12 minutes and 40 seconds, at Long Point, Canada, at last securing the championship he had pursued for so long.

1880 - The National Gallery of Canada was founded.

1880 - Calixa Lavallée composed the music for O Canada which became Canada's official national anthem. Until then, The Maple Leaf Forever, written in 1867 by Alexander Muir, had served as an unofficial anthem. The lyrics for O Canada were written first in French by Sir Adolphe-Basile Routhier. It wasn't until the early 1900s that English lyrics were written and after several versions, Robert Stanley Weir wrote, in 1908, the lyrics we use today.

1880s - Artist Paul Peel of London, Ontario moved to Paris where he studied painting and began to exhibit such famous works as After the Bath. 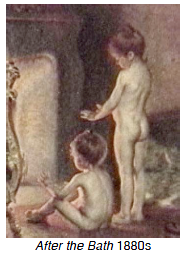 This painting defied the Canadian taboo against nudity, and it was very popular in Europe. Actress Sarah Bernhardt wanted to buy it, but it was too expensive and a collector in Hungary purchased the painting. Eventually it was returned to Peel's native province where it is now in the collection of the Art Gallery of Ontario.

1883 - The first "world" hockey championship was won by McGill University in Montreal.

1880s - A generation of poets, born in the decade of Confederation and raised in the new country of Canada, began writing about their homeland. They were called the Confederation Poets and the term, originally coined by Canadian professor, Malcolm Ross, was first applied to four poets: Bliss Carman, Charles G.D. Roberts, Archibald Lampman and Duncan Campbell Scott. The group was later expanded to include other poets including Isabella Valancy Crawford. 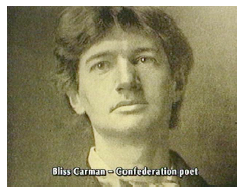 After attending universities in Canada, the USA and Scotland, Bliss Carman joined the editorial staff of the New York Independent, introducing Canadian poetry to its readers. Other works of his include The Kinship to Nature (1903). The following is an excerpt from his poem, "Low Tide on Grand Pré" (1893):

The sun goes down, and over all
These barren reaches by the tide
Such unelusive glories fall,
I almost dream they yet will bide
Until the coming of the tide....

Isabella Valancy Crawford supported herself and her family with her writings - both novellas and poetry. The following is from her poem about pioneer life called "Malcolm's Katie" (1884):

Said the high hill, in the morning, 'Look on me–
Behold, sweet earth, sweet sister sky, behold
The red flames on my peaks, and how my pines
Are cressets of pure gold; my quarried scars
Of black crevasse and shadow fill'd canyon
Are traced in silver mist; how on my breast
Hang the soft purple fringes of the night
These wild and rocking woods
Dotted with little homes of unbarked trees
Where dwell the fleers from waves of want... 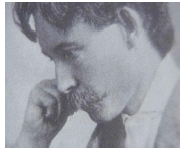 Archibald Lampman, working in the capital of Canada as a postal clerk, often found inspiration in the countryside of the Ottawa Valley. His early writing was for school publications. Later he achieved recognition in the USA in such magazines as Harpers, Scribners and the Atlantic Monthly. The following is an excerpt from Lampman's poem, "Heat" (1888):

From plains that reel to southward, dim,
The road runs by me white and bare;
Up the steep hill it seems to swim
Beyond, and melt into the glare.
Upward half-way, or it may be
Nearer the summit, slowly steals
A hay-cart, moving dustily
With idly clacking wheels 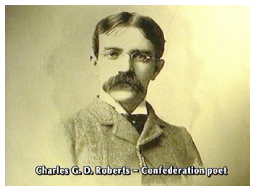 Charles G.D. Roberts, like Archibald Lampman, was the son of a clergyman. He led the way for the Confederation poets, inspiring both Lampman and Bliss Carman as they created indigenous poetry to describe the new country, Canada. The following are excerpts from two of his poems:

A high bare field, brown from the plough, and borne
Aslant from sunset; amber wastes of sky
Washing the ridge; a clamour of crows that fly
In from the wide flats where the spent tides mourn
To yon their rocking roosts in pines wind-torn;
A line of grey snake-fence, that zigzags by
A pond, and cattle; from the homestead nigh
The long deep summonings of the supper horn.
Black on the ridge, against that lonely flush,
A cart, and stoop-necked oxen; ranged beside
Some barrels; and the day-worn harvest-folk,
Here emptying their baskets, jar the hush
With hollow thunders. Down the dusk hillside
Lumbers the wain; and day fades out like smoke.

O Child of Nations, giant-limbed,
Who stand'st among the nations now
Unheeded, unadorned, unhymned,
With unanointed brow, --
How long the ignoble sloth, how long
The trust in greatness not thine own?
Surely the lion's brood is strong
To front the world alone!
How long the invalids, ere thou dare
Achieve thy destiny, seize thy fame, --
Ere our proud eyes behold thee bear
A nation's franchise, nation's name?