The Dumbells were a very popular group of entertainers during World War I. 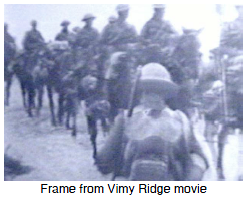 Their "Concert Party" brought impudent, funny and very pertinent entertainment to our war weary troops. First organized by Merton Plunkett of the YMCA from soldiers in the Third Division, they delighted troops with their "Dumbell Rag," "Oh It's a Lovely War," and their female impersonators.

Beginning with costumes made from bandages (field dressings) and lamps made from old cans, they attained such excellence that their show survived the war and played London and Broadway until well into the 1930s. The singer who accompanies the film of Vimy Ridge is Stan Bennett. He's singing "My Word" from the Dumbell show, "Aces High."