1837: Queen Victoria ascended the throne of Great Britain at the age of eighteen. 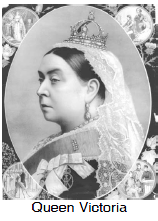 Until Queen Elizabeth II surpassed her in 2015, she had been the longest serving British monarch, reigning until her death in 1901 at the age of 82.

1840s: Potato famine in Ireland caused widespread starvation and many emigrated to the New World. The novel Away by Canadian author Jane Urquhart describes this period and the special experiences of one Irish immigrant family in Canada.

1843: The capital of the United Canada (Canada East and Canada West) was moved from Kingston to Montreal.

1844: Fort Victoria was built on Vancouver Island to be the new headquarters of the Hudson's Bay Company. The site was picked by the HBC's chief factor, James Douglas, who has been called the "father of British Columbia." Vancouver Island was proclaimed a crown colony in 1849 and Douglas became Governor in 1851. Victoria is now the capital of B.C.

1845: Sir John Franklin set out on his last and ill-fated expedition to find a Northwest Passage through the Arctic. 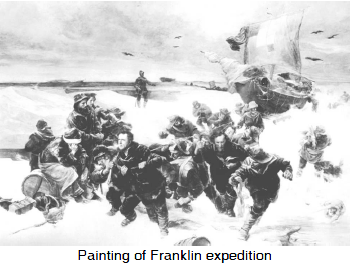 This was Franklin's third venture to find a northern route from the Atlantic to the Pacific Ocean. Franklin set out with 134 men and two sailing ships. No one survived. Many who have studied Franklin's expeditions point out that his greatest mistake was insisting on doing things "the English way," despite the harsh environment, and not learning from the advice and techniques of the native peoples (Copper Inuit and Dogrib, among them) whom he encountered. If he and his men had adopted native ways of living in the Arctic they might have survived. Rudy Wiebe's A Discovery of Strangers sets a fictional story in the context of one of Franklin's earlier expeditions. It won the Governor General's Award for Fiction in 1994.