John Maynard Keynes was a British economist who said that governments should cut taxes and spend money during a depression to stimulate the economy even if it meant going into debt. 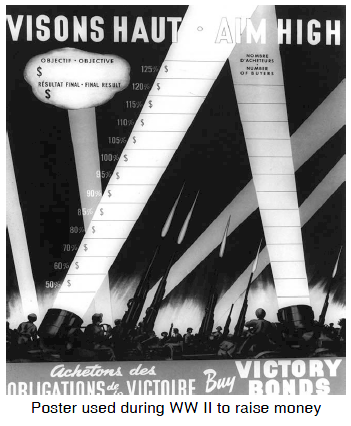 By spending money on large public works, this strategy would put money into the hands of consumers who would spend it and start the cycle of recovery. The Second World War seemed to prove his point. Suddenly governments were spending money and everyone had a job after ten years of unemployment and depression. This idea of
"deficit: the amount by which government income falls short of government spending in a given year. To make up the shortfall governments borrow and this is added to the debt.deficit" spending, or spending money you don't have, caught on in a big way with governments even after the war. Unfortunately they forgot the other side of the Keynesian coin, which said that in good times a wise government should increase taxes and save its budget surpluses to build up reserves for future down cycles in the economy.

<< Prev: Women in the War
Next: Internment of Japanese Canadians >>
Further Reference