The Cabinet is a council of advisors called ministers who give the Prime Minister advice. 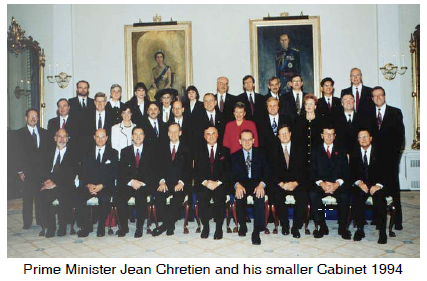 Each one is responsible for a different department or ministry. By tradition, the Cabinet members must be elected members of the House of Commons and are selected by the Prime Minister from his or her party. 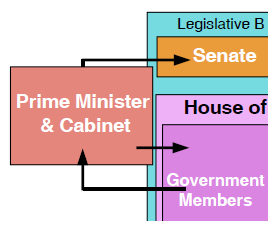 The size of the Cabinet has varied over the years. When Jean Chrétien was elected Prime Minister in 1993 he selected a Cabinet of 23 ministers. Some Cabinets have had over 30 members. After the 2011 election, Conservative Prime Minister Stephen Harper appointed a 38-member Cabinet. When the Liberals won the 2015 election, Prime Minister Justin Trudeau appointed a 31-member cabinet in which half the ministers were women for the first time in Canadian history. Each Cabinet minister is responsible for a different area or ministry. We have ministries for such things as the Environment, Canadian Heritage, Foreign Affairs, Fisheries and Oceans, Justice, Immigration, Transport, Public Works, Finance and National Defence, among others.