Big Bear was a Plains Cree chief. He was born in 1825 and died in 1888 on the Poundmaker Reserve in Saskatchewan. 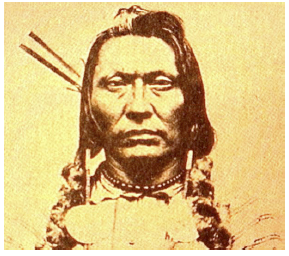 Big Bear had a very independent spirit. He repeatedly refused gifts from the Canadian government, recognizing them for what they were - bribes to ease future treaty negotiations. He said:

"When we set a fox-trap, we scatter pieces of meat all around, but when the fox gets into the trap we knock him on the head. We want no bait; let your chiefs come like men and talk to us."

Big Bear refused to sign Treaty No. 6 (1876) which gave the Canadian government rights to 768,000 hectares of territory. He was the first major chief of the Canadian prairies to refuse. He said the treaties were inadequate and didn't give enough to his people. He finally signed in 1882 in order to secure rations from the government for his starving people.

He organized a large Thirst Dance attended by 2000 Indigenous people in 1884 hoping to establish a union of North American First Nations and a single large Indigenous territory in Canada, but his efforts were thwarted by the Canadian government and the impatience of some young warriors who followed Riel into rebellion in 1885.