The first European explorers to visit what is now Canada discovered that the waters were teeming with fish, especially cod off the shores of Newfoundland. 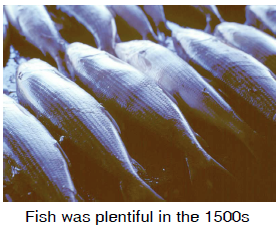 The European diet was fairly limited. Most families couldn't afford meat, but fish was a cheaper source of protein and would add variety to their diet. Also, Roman Catholics were not supposed to eat meat on Fridays and had almost 140 fastingfasting: going without food or going without certain kinds of food, especially meat. days in the year which had to be meat-free. This increased the demand for fish. Even in England, which was not predominantly Catholic, some fish days were introduced into the religious calendar to help create demand and foster a burgeoningburgeoning: growing or flourishing. fishing industry.

Many countries sent boats to the Atlantic coast - France, England, Holland, Scandinavia and Portugal. The British also used the fishing industry as an unofficial training ground for sailors who, after acquiring valuable experience at sea, could be pressed into service in the navy.