The Acadian community developed in isolation from both France and the larger French colony, Canada, which was growing along the St. Lawrence River. At various times it was either ignored by France or under English jurisdiction which gave it some distinctive differences from the French in Canada. 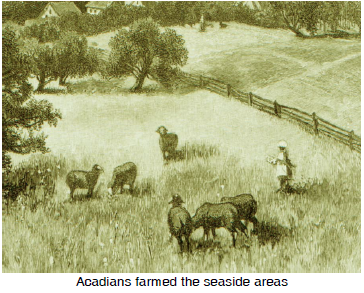 For one thing, the seigneurial systemseigneurial system: a feudal system of land ownership whereby huge grants put land ownership in the hands of seigneurs who rented sections to farmers. was much weaker or non-existent in Acadia and there was no intendant intendant: an important administrative official in New France, responsible for finance, justice and police in the colony. Jean Talon was the first. to enforce it. The family and the church provided the main structure of the society with extended families being the real core of the community. Although the church was an important part of Acadian life and the clergy, rather than intendants or seigneurs, served as unofficial judges to settle disputes, the church never had complete authority. Large families and intermarriage created a strong network of family connections that linked communities together and this is what would drive the long quest for re-unification after the expulsion of 1755.

Acadia was temporarily English during the mid-1600s when France began to take its North American colonies seriously. New France was officially declared a Royal Colony by Louis XIV in 1663, but the resulting military spending and seigneurial development bypassed Acadia which was under the English at the time. As a result, the old feudal feudalism: a social, economic and political system whereby vassals (or serfs) owed military and other services to their lords in return for use of his land and protection. ideas of Europe never took hold. The citizens organized local meetings to reach decisions about things and they continued to trade with New England against the rules of mercantilism mercantilism: an economic system in which a nation depends on its colonies to provide cheap raw materials and a market for its manufactured goods. This creates an economy that has more exports than imports. Mercantilism replaced feudalism. (an economic system which dictated that colonies trade exclusively with the mother country). This democratic characteristic of Acadian society was observed by Governor Frontenac of New France who complained in 1678 about the troublesome "parliamentary tendencies" of the Acadians.

Another distinctive feature of Acadian society was its relatively good relationship with the local Indigenous people. While most colonists used Indigenous groups as allies against other Indigenous groups and competing colonists, the Acadians were friendly with everyone in their area. The Mi'kmaq were the largest group, but there were also Malecite and Abenaki peoples. Unlike the English, the Acadians didn't clear Indigenous hunting grounds to make way for their farms. They used reclaimed tidal flats tidal flats: the lands that are left exposed when the tide goes out. The soil, deposited over the years by the tides, is very rich. Also called flood lands or flood plain. around the Bay of Fundy so they weren't competing for the same land and resources. There was some intermarriage with the Mi'kmaq and a number of Indigenous practices and terms were incorporated into Acadian culture and language.

<< Prev: Early History of the Acadians
Next: Louisbourg >>
Further Reference