Based on the European feudalfeudalism: a social, economic and political system whereby vassals (or serfs) owed military and other services to their lords in return for use of his land and protection. system, seigneuriesseigneury: a seigneur's estate. were plots of land given to noblemen - who were called seigneurs - in return for loyalty to the King and a promise to perform military service when necessary. 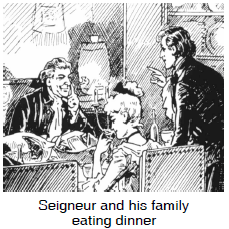 The seigneur also had to clear land and encourage settlement within a certain amount of time. The seigneur sublet his land in smaller parcels to peasant farmers. Both seigneur and tenant had obligations to each other. The tenant farmer was obliged to pay a nominal rent for the land and give one-fourteenth of his grain harvest to the seigneur. The seigneur was obliged to build and maintain a mill for grinding the grain. He was also responsible for settling disputes and acting as local magistrate upholding French civil lawcivil law: law that deals with private rights (property and the individual), as opposed to "criminal" law which involves crimes against the community. French civil law is written down, or statute law, as opposed to common law..

The seigneurial system worked against economic development in the colony. The dues imposed on the peasants were potentially quite heavy and had the effect of stopping the peasants from accumulating any surplussurplus: extra quantities leftover after basic needs are met. which they could use to start new enterprises. The seigneurs, who had money, tended to spend it outside the colony on goods from France rather than put it into the economy of the colony.

Unlike the serfsserf: a peasant bound to a particular piece of land, owing service to the lord who owned that land. He could not leave but could be sold with the land. of feudal Europe, however, the tenant farmer or habitant was not tied to the land. He could move to a different piece of land by selling one lease and buying another.