Joey Smallwood was born on Christmas Eve in 1900 in Bonavista Bay, Newfoundland. He dropped out of school and apprenticed as a printer, but soon moved to the editorial side of newspapers to work as a reporter. 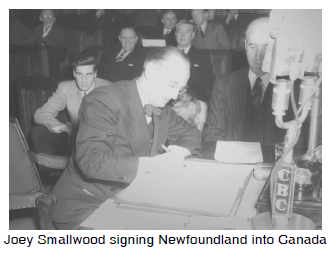 He furthered his education by self-study, especially in the areas of social reform and the labour movement, eventually becoming a newspaper editor, union organizer and campaign organizer in the political arena.

When the depression hit hard in Newfoundland, forcing it to give up its democratic government and make itself a protectorate: a weak country under the protection and partial control of a strong country.protectorate of Great Britain, this had a strong effect on Smallwood and after the Second World War he led the drive to join Canada. By the time he became seriously involved in politics he was a well-known voice in Newfoundland, having worked on radio, broadcasting to all the isolated outposts of the region.

Smallwood won the leadership of the Liberal party and led it to victory in the new province's first election in 1949. He won every election thereafter until 1971. Critics have accused Smallwood of high handedness and he was criticized for having close relationships with the entrepreneurs of the province whose support he needed. He was a popular politician, though, and was voted back into the
Legislature: the branch of government responsible for making laws.Legislature at the age of 75.