King had entered the war assuring Quebec that there would be no
conscription: the compulsory enlistment of men into the armed services by an act of law.conscription this time. We would meet our wartime obligations only with volunteers. When the war did not end early, King was forced to reconsider. He put the question to a plebiscite: a direct vote by the qualified voters of a country, province, etc. on some question.plebiscite asking the Canadian public if it would release him from his earlier commitment. 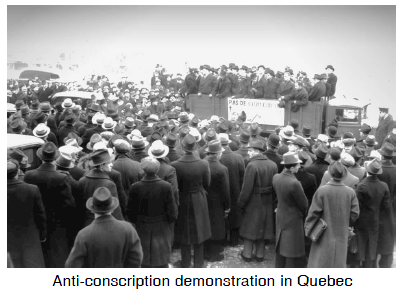 Predictably the country split on the issue with French Canadians voting overwhelmingly no, and English Canadians voting yes. The no vote was also supported by German and Ukrainian immigrant communities in English Canada. Now King had to perform a great political balancing act. He couldn't anger English Canada by ignoring the call for conscription, but enforcing it right away would alienate Quebec completely. So King performed one of his classic political sidesteps by declaring, "Not necessarily conscription but conscription if necessary". The National Resources Mobilization Act was changed to make conscription possible, but it would not be used unless absolutely necessary. King hoped the war would end before he had to make any further commitments to conscription.