The Industrial Revolution (1760 - 1850) was more gradual than the name "revolution" might suggest, but it was such a major change in the way people lived and worked that we've come to think of it as a revolution. Some people say that the changes being made in society today as a result of digital technology will be just as dramatic as the Industrial Revolution and lead to a new, quite different age. 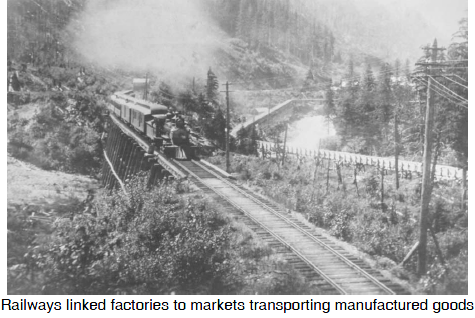 We generally refer to the Industrial Revolution as that period in British history roughly between 1760 and 1850. Industrial revolutions happened in other countries at different times and some countries are just becoming industrialized now.

Before the Industrial Revolution, most of the population of Great Britain lived on farms or in villages. Farmers cultivated strips of common farm land and most manufacturing was done by families in the home. These were called cottage industries and often they involved spinning and weaving. Production was mostly on a subsistencesubsistence: a means of keeping alive; just enough to keep alive with nothing leftover or surplus. level, each family producing just enough to meet its own needs. Changes in technology and agriculture allowed the development of mass production and large scale farming and the resulting surpluses were distributed by new means of transportation like the railway and canals.

One of the most important new inventions was the steam engine which could be used to power factory machinery, ships and locomotives. 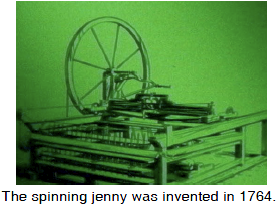 Stronger, more precise tools could be made from iron when they developed a smeltingsmelting: melting ore (rock containing some metal) in order to get the metal out of it. process that used coal instead of charcoal. And the mechanical production of interchangeable parts made it possible to make more sophisticated machines and engines. James Hargreaves, a weaver, invented the spinning jenny, a machine with several spindles that allowed one person to spin a number of threads at the same time. Although he designed it to use in the home and never imagined that it would be used for mass production in factories, some workers were already afraid of being replaced by such machines. They stormed Hargreaves' cottage, destroyed his invention and drove him out of the village. The spinning jenny, the power loom and other innovations continued, however, and by the early 19th century mass production of fabric, mostly cotton, was widespread.

In agriculture, wealthy landowners were gradually buying out small farms and trying different methods to make the land more productive, like planting in rows rather than scattering seeds, using fallowfallow: ploughed and left unseeded for a season or more to allow the soil to regain nutrients. fields for certain crops rather than leaving them empty for a season and experimenting with selective breeding of sheep to produce sturdier, larger animals. Parliament introduced a series of inclosure acts that allowed the large landlords to fence in or enclose what were previously common fields used by small farmers.

Deprived of making a subsistence living in their farms and villages, a lot of people moved to the city where they encountered slums and dangerous working conditions in the factories. The benefits of the Industrial Revolution were accompanied by many evils including child labour, long working hours and boom-and-bust economic cycles. Many decided that it was worth the gamble to leave Great Britain and make the long voyage to the New World where they hoped greater opportunities awaited.