Louis-Joseph Montcalm was born in France in 1712 and died on the Plains of Abraham outside Quebec City in 1759.

Montcalm came from an aristocratic aristocracy: people of noble title, rank or birth; a ruling group of nobles who had wealth and power. family and entered military service at the age of nine. His active military career began in 1732 and he was involved in several European battles until he was severely wounded in 1746. He had been living peacefully with his family for several years on an army pension when the Seven Years' War broke out between Great Britain and France. Commanders were needed in North America so Montcalm was sent. He led the French forces and the governor, Vaudreuil, led troops of Canadians and Indigenous people. Montcalm was critical of this Canadian "rabble rabble: a disorderly crowd or mob; in contemptuous use, the lower classes." and never appreciated how effective their guerrilla guerrilla: a method of warfare carried on by small independent bands of fighters who harass the enemy by sudden raids, or ambushes. warfare techniques could be if put to the right use. Montcalm stuck to the deliberate siege methods of European warfare. 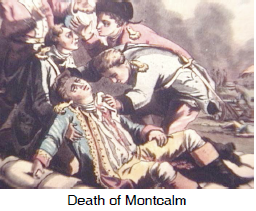 In the summer of 1759 the British, under General James Wolfe, began an attack on Quebec City. Montcalm's troops met them on the Plains of Abraham and the battle began. It was all over in 20 minutes. Montcalm was wounded and died the next day. Historians have said that Montcalm should have waited for reinforcements which were on the way. Also, if he had stayed within the fortifications of the city, Wolfe might have been forced eventually to abandon the attack.