Jacques Cartier was born in 1491 in St. Malo, France. He died there in 1557. Cartier was the first European to explore and make coastal drawings of the Gulf of St. Lawrence and the St. Lawrence River. 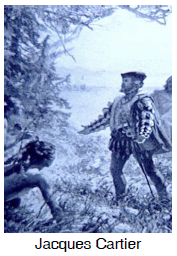 He made three voyages between 1534 and 1541. The purpose of these expeditions was to find gold and a route to Asia where treasures and valuable spices were supposed to exist in abundance. Navigating up the St. Lawrence, Cartier thought he had found the gateway to China. Although it wasn't, it did turn out to be central to the French empire in America, providing a water route to Hudson Bay and the Mississippi River. This created a transportation network for the fur trade. Cartier spent one winter icebound in the St. Lawrence and learned from the native people how to make a tea from white cedar that would cure scurvy.scurvy: a disease caused by a lack of Vitamin C (fresh fruits and vegetables) in the diet. Symptoms include swollen, bleeding gums and bluish spots on the skin. Many of his men died that winter, nevertheless. Cartier's notes and observations about native life were very helpful to future explorers.