In his report to the British Parliament, Durham said that the troubles in Upper and Lower Canada were the result of a misuse of power by the oligarchiesoligarchy: a form of government in which power is held by only a few people; also the people who form such a government. and a clash between the appointed Executiveexecutive: the administrative branch of government responsible for managing government and putting laws into effect. branch and the elected Assembly. He realized the colonies should have a more accountableaccountable: (referring to government) responsible; liable to be called to account or explain one's actions. government. 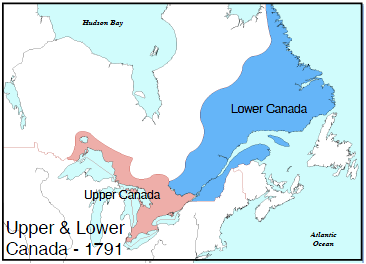 Durham did not have an appreciation of French Canadian culture, however. He dismissed it as a static society, inferior to the British. Durham suggested a political union of the British North American colonies which would give the English-speaking people a majority, result in the assimilationassimilate: to adopt the values, customs and behaviour of another society; to be absorbed into it. of the French (he thought) and make it easier to complete projects like a continental canal system.

British reaction to Durham's Report was mixed. The colonial secretary, Lord John Russell, was opposed to giving up British parliamentary supremacy by allowing the colony to have representative government. He agreed with the proposal for union, though, and a bill to unite Upper and Lower Canada became law on July 23, 1840, just five days before Durham died. This was the Act of Union.