Tecumseh was a Shawnee chief. He was born around 1768 in Ohio. Before he became allied with the British during the War of 1812, he was involved in several battles against the whites in the Ohio River Valley as the Americans expanded westward from the original Thirteen Colonies into Indian Territory. 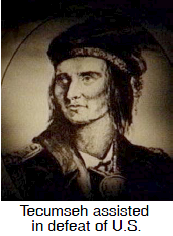 He argued that the land belonged to all tribes in common and whites could not make deals one-by-one with individual tribes. He urged the Indigenous people to unite in a confederation of tribes as their only hope against the whites.

Tecumseh's first renown as a warrior came during a battle on the Ohio River in 1788. This was during a period called the pan-Indian movement of 1783-95 which was led by Mohawk chief Joseph Brant.

In 1808 Tecumseh made his first trip to Canada and met with the British military. In 1809 he travelled to the Seneca and Wyandots in Ohio and the Six Nations in New York, trying to establish a united First Nations confederacy. This was difficult as there were many cultural and language differences among the tribes.

After Governor William Henry Harrison of Indiana Territory made a big land grab of Indigenous hunting grounds, contrary to an earlier promise, Tecumseh retaliated by throwing his support to the British in 1810. The threat of war was already in the air.

Tecumseh was humanitarian and did not torture his prisoners. During the War of 1812 the British gave him a uniform to wear and he led troops in four major battles, including the Siege of Detroit where he fought with Isaac Brock. In October 1813, he changed from the British army uniform to his own buckskins before the Battle of the Thames at Moraviantown (present-day Thamesville, Ontario). Perhaps he sensed a different outcome this time. He died in that battle at the age of 45 after he was captured by the Americans and flayed. His skin was collected by some of the American soldiers - a gruesome souvenir.

<< Prev: The War of 1812
Next: The Industrial Revolution >>
Further Reference

This was the first digital, multimedia history of Canada. It started out as a laserdisc in 1993 and the CD-ROM version has been used in schools across the country. This online, public domain site is the fifth edition of the project.