Today there are over 500,000 Acadians living in New Brunswick. With a rich culture that has produced wonderful singers like Edith Butler and writers like Antonine Maillet, this tenacioustenacious: holding on firmly; persistent. people has managed to survive a difficult history. 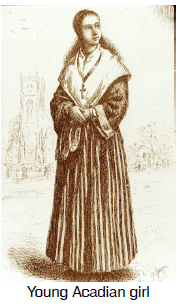 Originally a French colony, Acadian lands were passed back and forth between the French and English by various treaties settling European wars. The last of these was the Treaty of Utrecht in 1713 which gave the land to Great Britain.

For a time the Acadians lived peacefully with the English. In fact, the period from 1730 to 1748 has been called the Golden Age of the Acadians. Their farms prospered and their population grew from 2300 in 1714 to over 13,000 by mid-century. Many of the first Acadians came from an area in the west of France where they had learned to build dikes and drain salt marshes. They used these skills to drain tidal flatstidal flats: the lands that are left exposed when the tide goes out. The soil, deposited over the years by the tides, is very rich. Also called flood lands or flood plain. around the Bay of Fundy and the resulting farmland was very fertile. Also, their coastal farming activities did not interfere with the fishing and hunting culture of the local Mi'kmaq tribes, and the Acadians enjoyed good relations with the Indigenous people.

During British rule, the Acadians maintained a careful neutralityneutral: belonging to no side in a conflict; not taking the part of either side in a conflict or war.. They would not fight with the French, they promised, but neither would they fight against them. They refused to sign any oath of allegiance to the King of Great Britain which required them to take up arms against the French. Initially this didn't bother the British and the Acadians felt their neutrality was accepted, but then war broke out again between Great Britain and France. 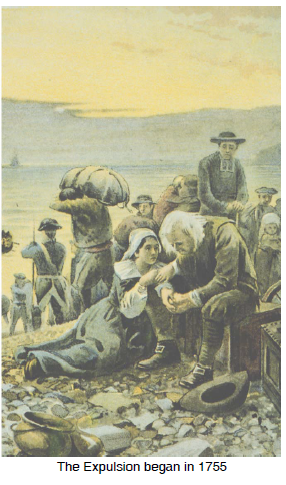 Governor Edward Cornwallis threatened deportationdeport: to banish or expel. if the Acadians wouldn't sign the oath. When he was replaced in 1754 by Governor Charles Lawrence those threats were carried out. The expulsion of the Acadians was quick and cruel. Beginning in 1755 they were herded onto ships and dispersed down the coast of the English colonies to the south. Families were split up and more than a third were lost at sea or died of disease. Some made it to Louisiana where they created the Cajun culture. Over the years many Acadians returned from exile, determined to reunite their families. Their original farms had long been taken over by British settlers, but they recreated a community around the less fertile Moncton area of New Brunswick where they have risen again as a strong, distinct culture within Canada.

Next: Early History of the
Acadians >>
Further Reference