The League of Nations was established during the Paris Peace Conference of 1919 at the end of the First World War.

It was the forerunner of today's United Nations, an international body with representatives from many countries whose purpose was to maintain world peace. Prime Minister Robert Borden managed to get Canada a separate seat on the League, independent of Britain. 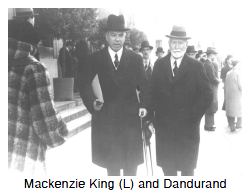 When the United States objected, the Canadian delegates pointed out that Canada, despite its small population, had lost more soldiers during the war than the Americans. Canadians were also in the war from the beginning, three years before the Americans.

Our first representative on the League's decision-making council was Senator Raoul Dandurand. Although Canada wanted to be in on European decisions that might affect it, Canadians were leary of the commitment required by Article 10 to provide military aid to any other member under attack. This was the idea of collective security, where an attack on one country was considered an attack on the group. However, Europe was an ocean away and so were its problems. 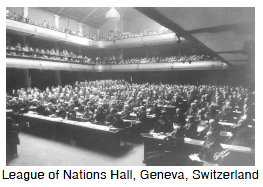 The only country we shared a border with was the United States and our relations there had been peaceful for 100 years. After our losses in the First World War, Borden, and Mackenzie King after him, were not prepared to make commitments of money and men to settle foreign disputes.

<< Prev: The Roaring Twenties
Next: Imperial Conferences during the 1920s >>
Further Reference