Robert Baldwin was born in York (now Toronto) in 1804. He was a strong promoter of more self-rule for Canada. 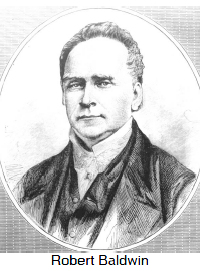 He was more moderate than the rebel leader, William Lyon Mackenzie, who wanted an American-style republic: a democratic system of government in which the head of government is a president rather than a monarch.republic. Baldwin favoured a parliamentary system based on the British model.

As the movement for responsible government: a system of government in which the executive (law makers) must have the confidence (support) of a majority in the elected legislative assembly.responsible government intensified, Baldwin became recognized as the leader of an emerging Reform party. As early as 1836, Baldwin was appointed to the Executive Council of Upper Canada, but when the British governor refused to pass his reform measures, he resigned.

Finally, in 1848, Baldwin joined the Lower Canada reform leader, Louis Hippolyte LaFontaine to form a coalition government representing the majority opinion in the elected Assembly. This is called "having the confidence" of the majority and is the key principle of responsible government. Baldwin died in 1858.