The War Measures Act was passed unopposed in 1914. 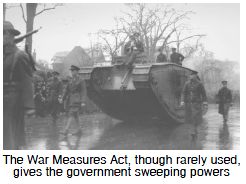 This allowed the federal government to suspend civil liberties and by-pass parliament to do things through order-in-council that it felt were necessary for the war. For instance, factories could be told to stop producing farm implements and start manufacturing arms and ammunition instead. Immigrants who had come from what were now enemy countries, like Germany, had their movements controlled and anyone thought to be an enemy sympathizer could be arrested and kept in internment: being forced to stay in a certain place.internment camps without trial.

One of those arrested in Halifax was Leon Trotsky, an unknown Russian who was about to go down in history as one of the fathers of the Russian Revolution of 1917. After his month in Nova Scotia, he returned to join with Lenin and lead the Communist overthrow of the old Russian regime.

The War Measures Act was used again during World War II. The only time it was enacted during peacetime was October 1970 when Prime Minister Pierre Trudeau used it to make searches and arrests during the FLQ crisis. The FLQ (Front de libération du Québec) was an extremist group of French separatists who were involved in kidnappings and a murder. Under the War Measures Act, many people were arrested and held without charges on suspicion of sympathizing with the terrorists.